If fly fishing has taught me one thing in life it’s that it’s a great way to meet special people. The latest addition to my circle of fly fishing friends is Max Natmessnig.

Max, 34, heads the Chef’s Table at Hotel Rote Wand in Lech, Austria. He is considered one of the finest young chefs in the country and happens to be a fly fisherman. 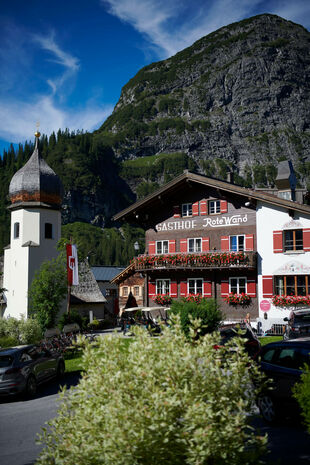 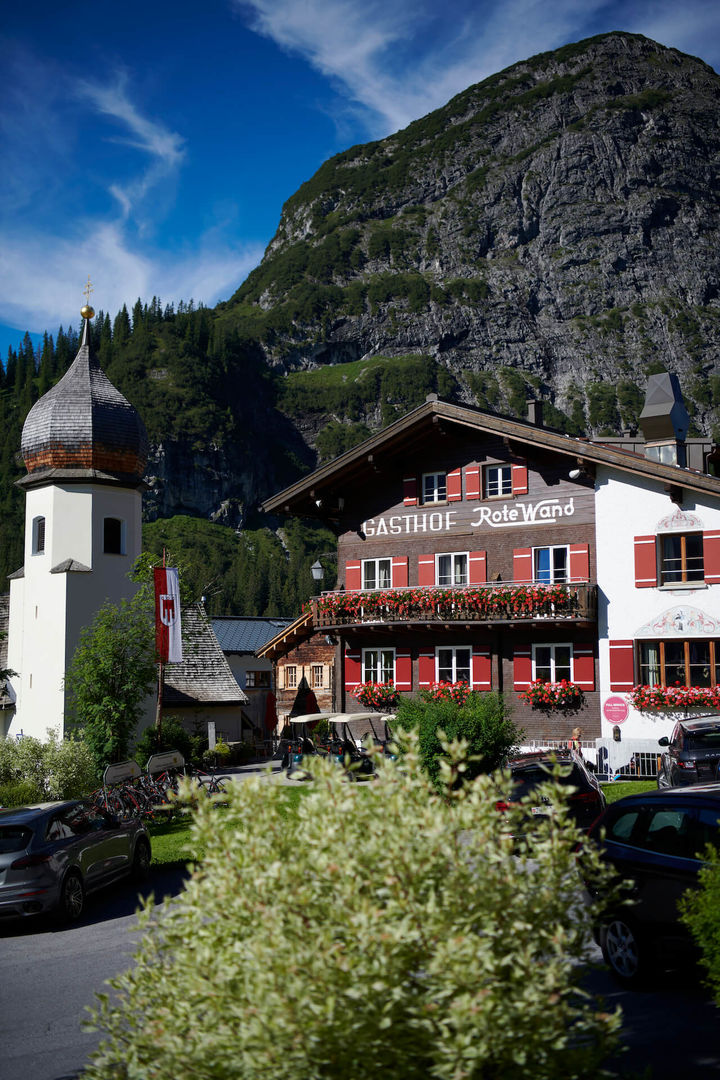 I stumbled across him by chance on instagram. When checking out his profile, I realized we had one friend in common – my cousin from Brookly, NY who happened to work at Nomad restaurant in Manhattan at the same time as Max a few years ago.

Reaching out to him I mentioned my connection to New York where I did my Master’s in journalism and we quickly decided to spend a day fishing together. Easier said than done with Max working a six day week.

We finally found a date at the end of June but had to postpone last minute. The snowmelt high in the mountains around Lech, turned the water murky and made fishing impossible. But two weeks later the stars aligned and I jumped in the car to make the three hour ride from Munich to Lech.

In the meantime since first reaching out to Max, I had met another fly fisherman who turned into a good friend of mine with a connection to New York: Christian Anwander. Originally from Austria, Christian, a photographer, has lived in New York for the past 15 years with his family. The place he grew up in however, is only an hour’s drive from Lech. 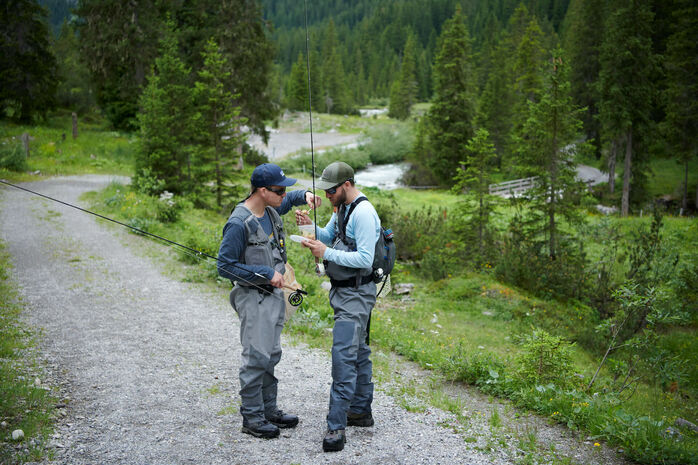 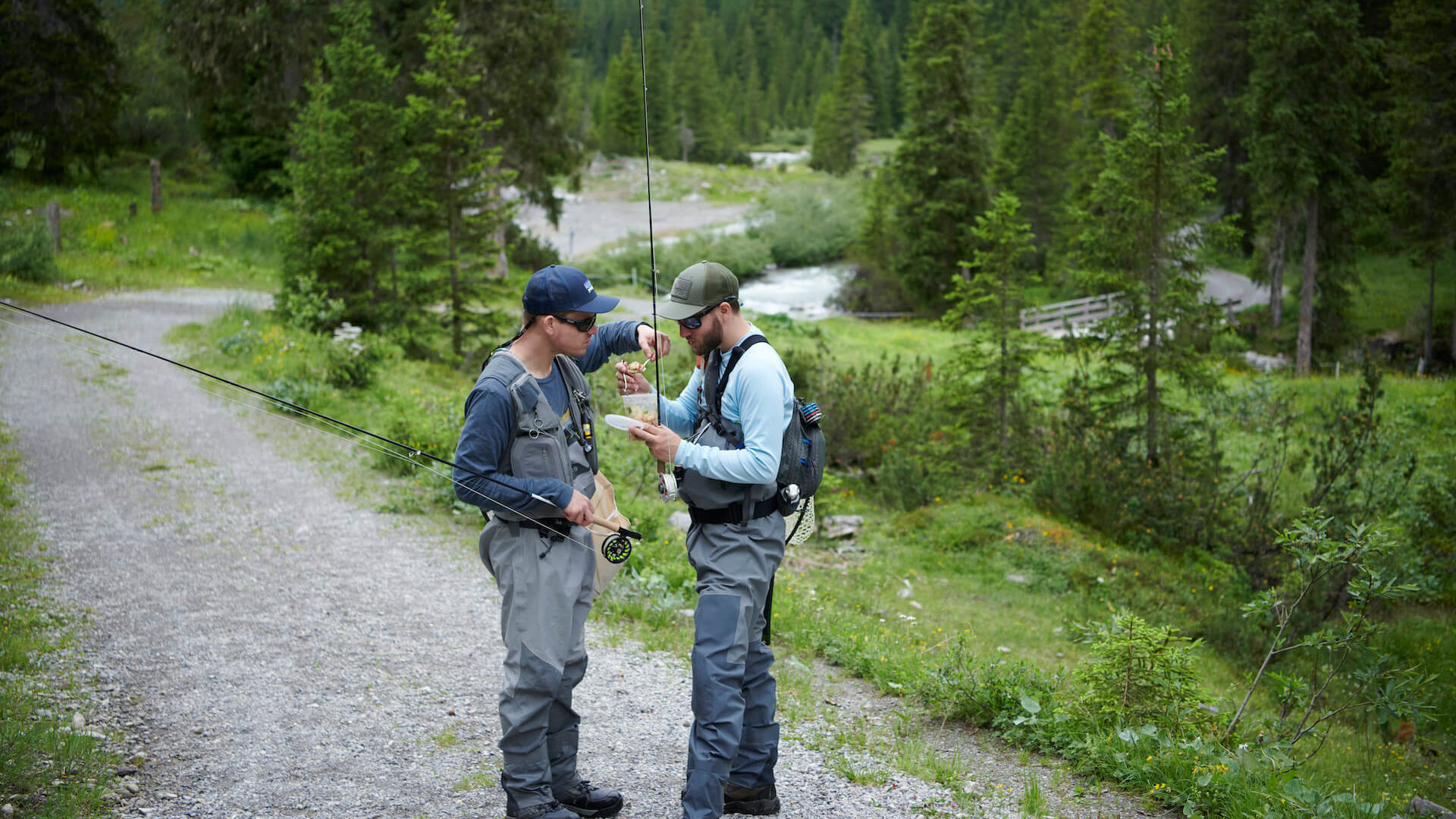 After picking up the day permits to fish the Lechbach (which turns into a mighty stream behind the German border and finally unites with the Danube river close to the city of Donauwoerth) we drove up to Zug to meet Max and Thomas.

Since they were already in their waders ready to fish, Christian and I lost no time. Soon afterwards we made our first casts while getting to know each other. The beauty of meeting people through fly fishing is the fact that there is basically no initial hurdle. The sport seems to function as a uniting force resulting in the absence of any restraint one might usually have towards strangers. 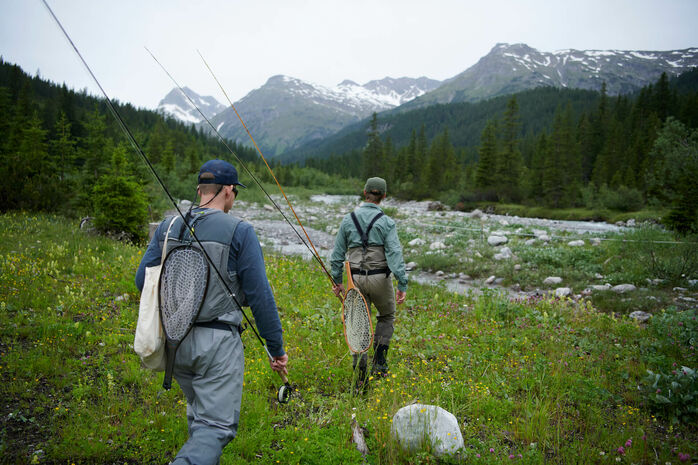 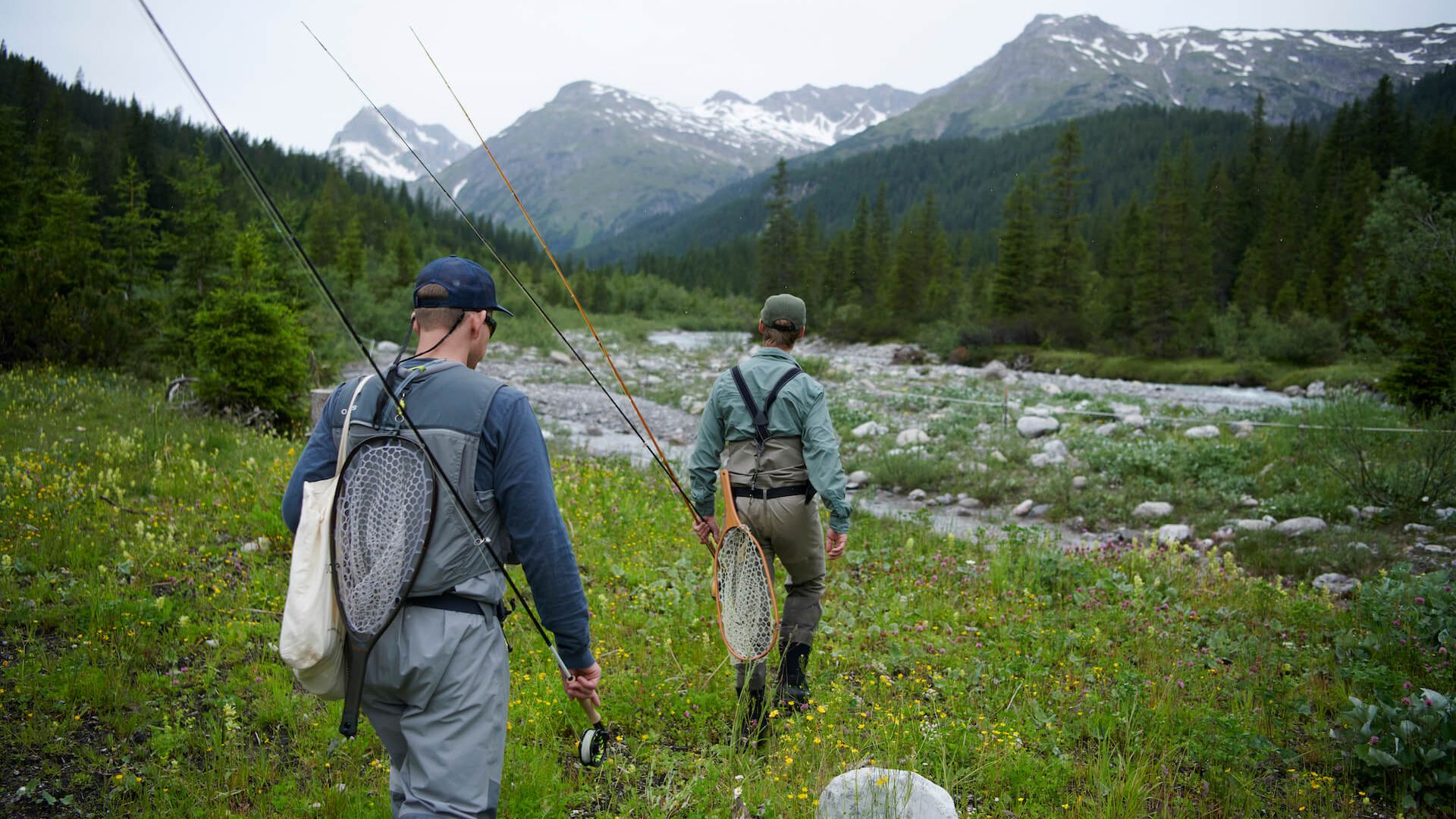 For the morning session we decided to make our way upstream and fish Section 1 (marked in green on the map above). This is where the Lech is still young, only a few miles from its source up in the mountains that surround one of the Alps’ best ski resorts. The fishing around here is fun since it’s easy to locate the places where trout will hold. They avoid the current and remain in places that save them energy. 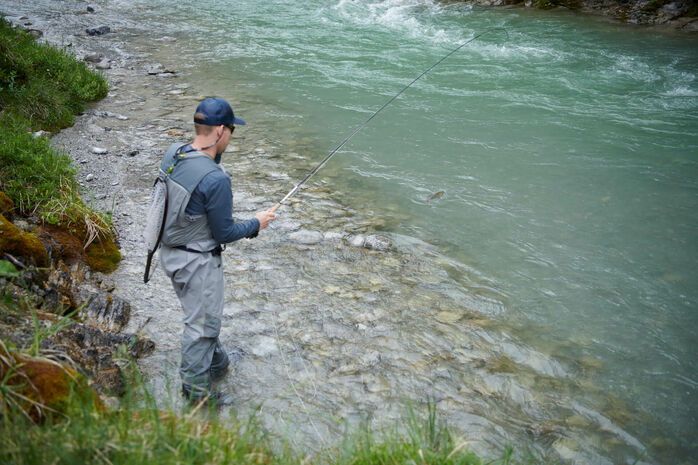 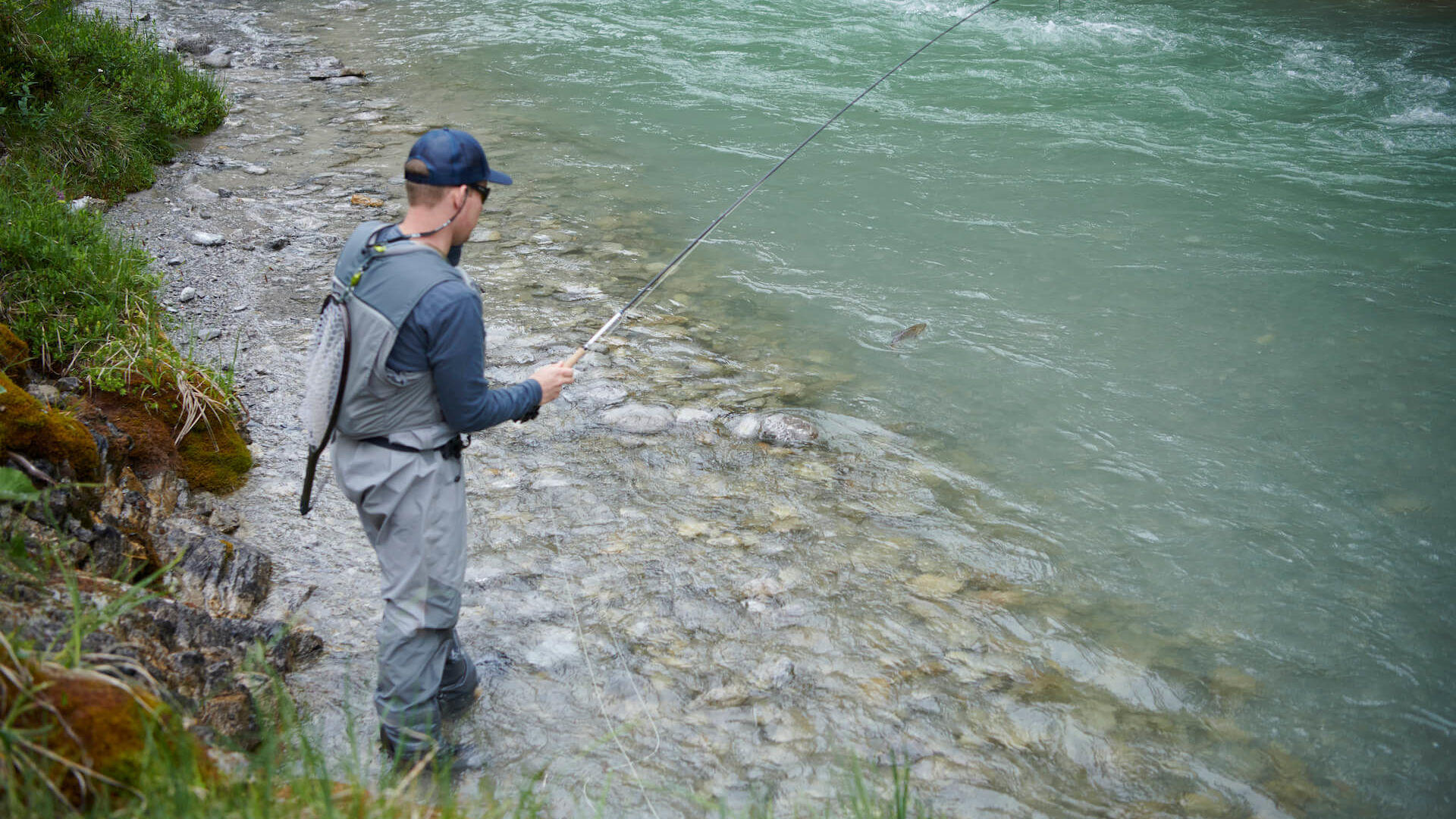 Originally from a small town close to Vienna, Max started his career in the Netherlands working under Sergio Herman at Oud Sluis, a legendary three-star restaurant that closed its doors in 2013. Afterwards he moved on to New York where he had stints at the NoMad restaurant and later at Chef’s Table at Brooklyn Fare under César Ramirez.

It was there that Joschi Walch of Hotel Rote Wand in Lech, met and convinced Max to return to his native Austria and head the Chef’s Table at Rote Wand’s Schualhus. Since the start of his regency in 2017, Max has earned a reputation reaching far beyond the narrow valleys of Vorarlberg. 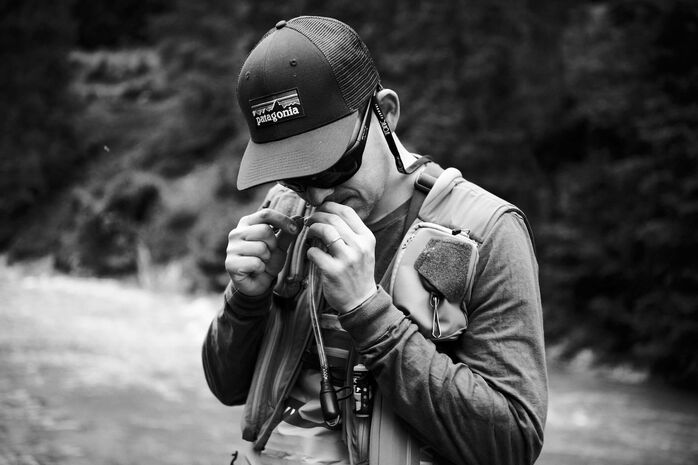 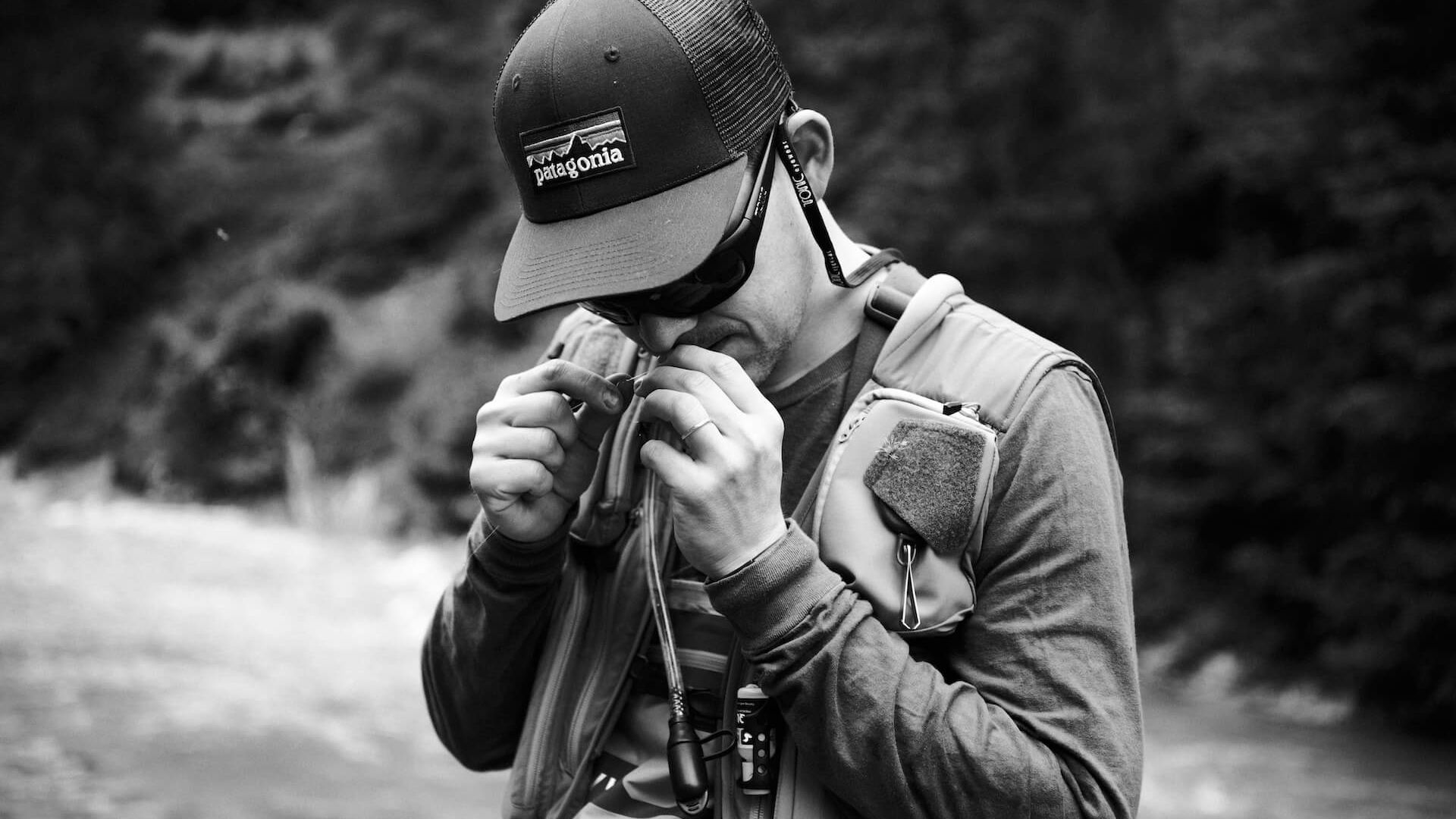 Max has been fishing since his childhood days and enjoys the tranquility of the sport when he has a rare day off. We worked our way upstream from pool to pool. You can almost be sure to find a good trout in every pocket water of the upper beat. Since summers are short up here the fish are hungry and will take a fly if presented correctly. The biggest challenge is the strong current that makes a good drift difficult. 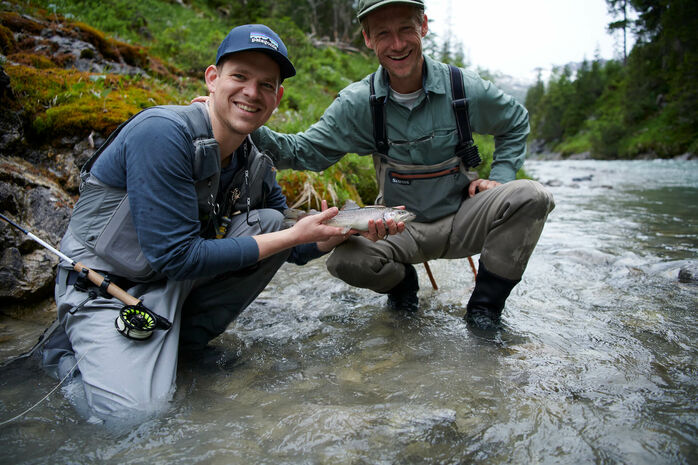 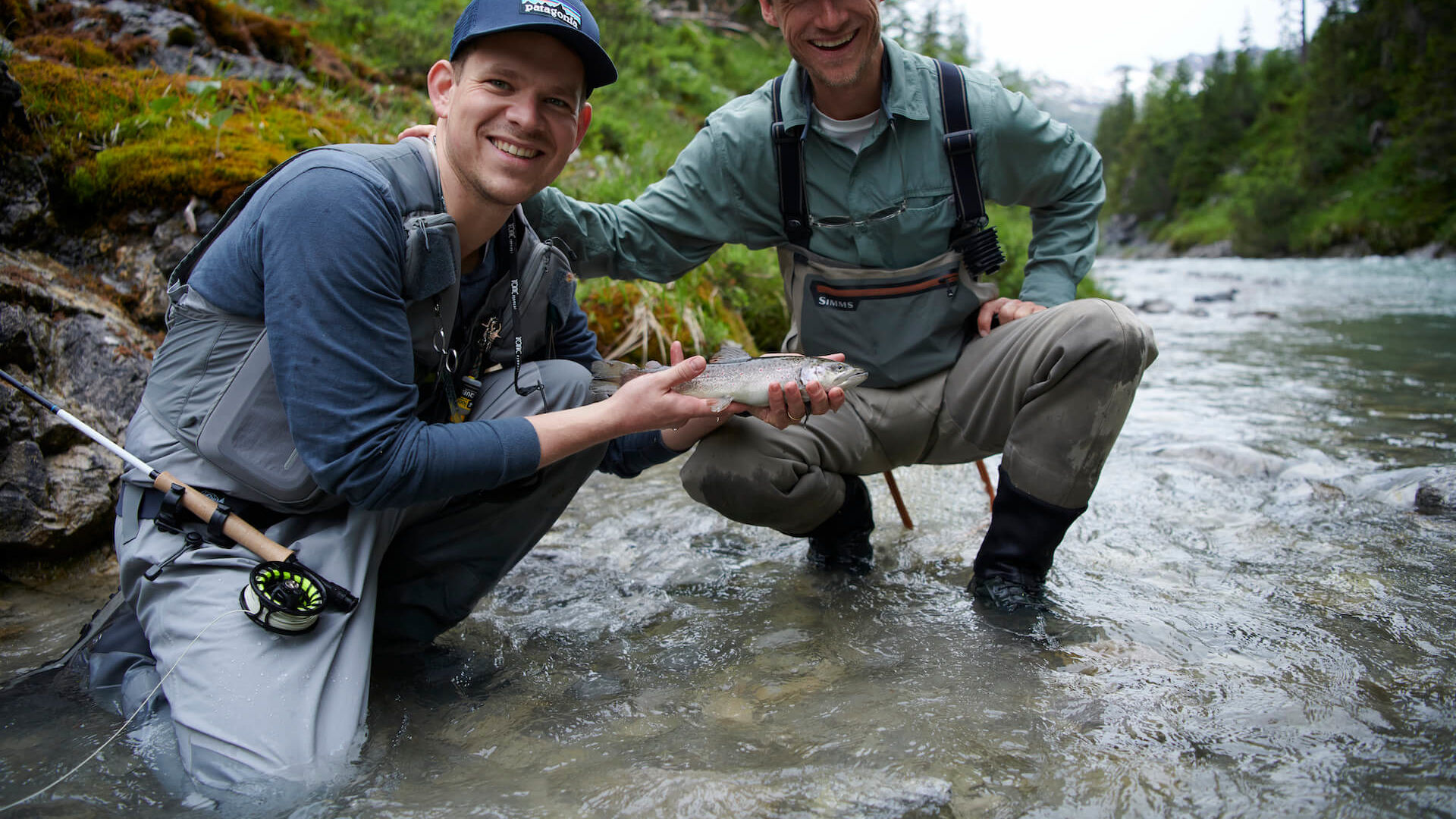 We instantly had a nice and relaxed vibe amongst the four of us and took turns casting to rising trout. We helped each other choose the right fly and gave instructions as to where a good fish was feeding.

As you would would expect from a world class chef like Max, he had prepared a good lunch. It was, however, served on the go to maximise fishing time.

Towards the end of our morning session, Christian managed to land a nicely sized brown trout that we decided to keep for dinner. We stopped by the Hotel Rote Wand and dropped off the fish. The charming staff took care of it and served us a cold beer on the terrace. The short break was a welcome interruption since fishing up here comes close to a proper mountain hike. 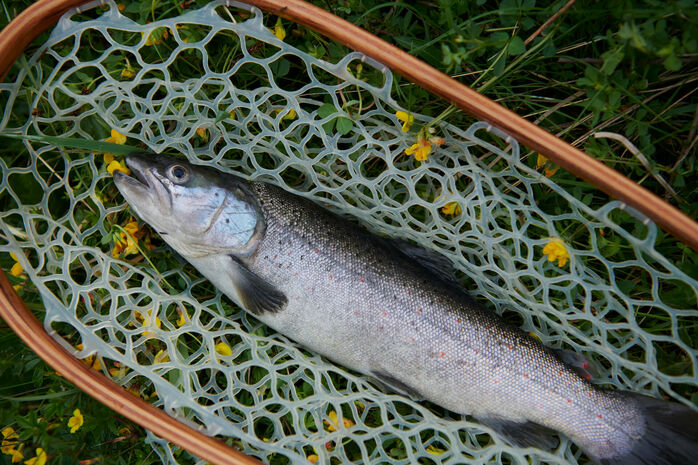 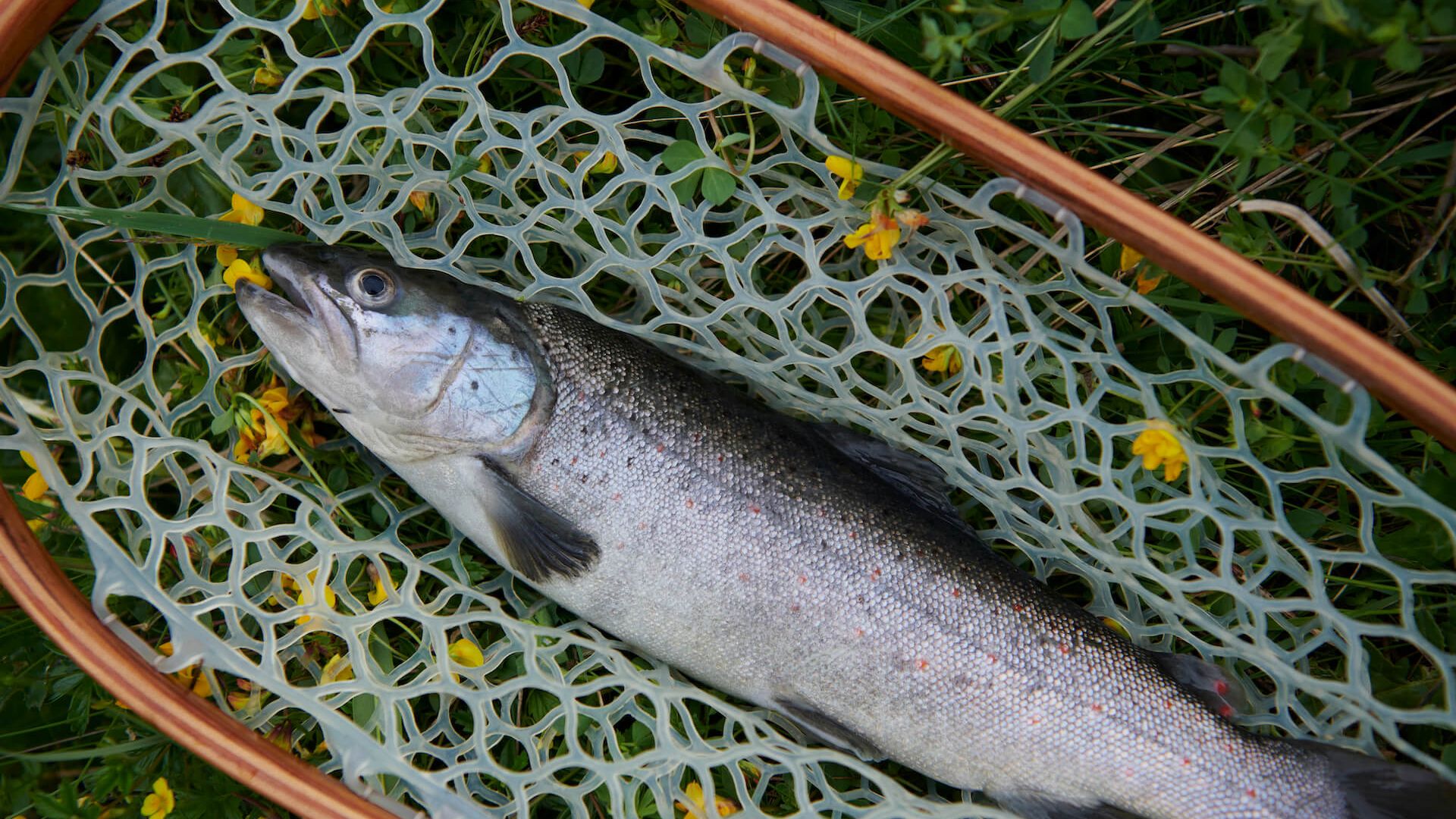 Afternoon Session in the Gorges

For the afternoon session, Max and Thomas picked the Section 4 which spans from Lech to Warth. Large parts of that beat are almost unfishable since the water of the Lechbach squeezes through a narrow gorge. Steep hills on each side make it almost impossible to get down to the water. We wanted to give it a try nevertheless and parked our cars at the Gasthaus Bodenalpe.

The river quickly grows bigger on this stretch since a lot of small creeks and rivulets flow into the Lech. On the map we had made out a path along the river. It seemed to allow us to access the water every now and then. But an uncertainty remained as to whether it wouldn’t be too steep to get down to the river.

The reason we had decided to tackle this stretch of the river was our assumption that fishing pressure would certainly be low. We had to experience the hard way that our assumption was true since there was no way to get down to the Lech for about 40 minutes. We kept the spirit up regardless and enjoyed the impressive surroundings with peaks reaching almost 10,000ft. 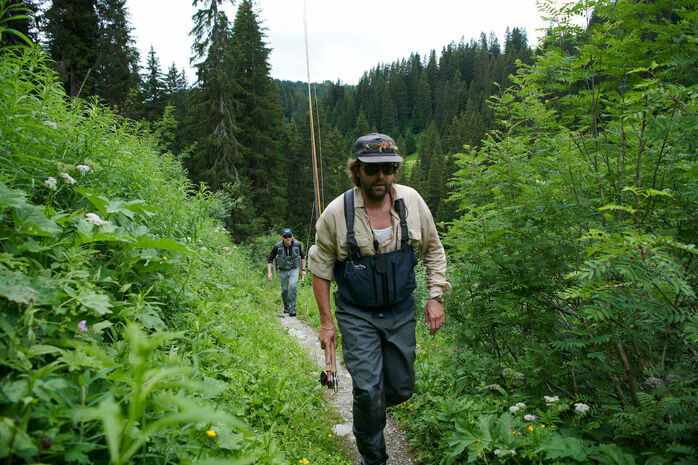 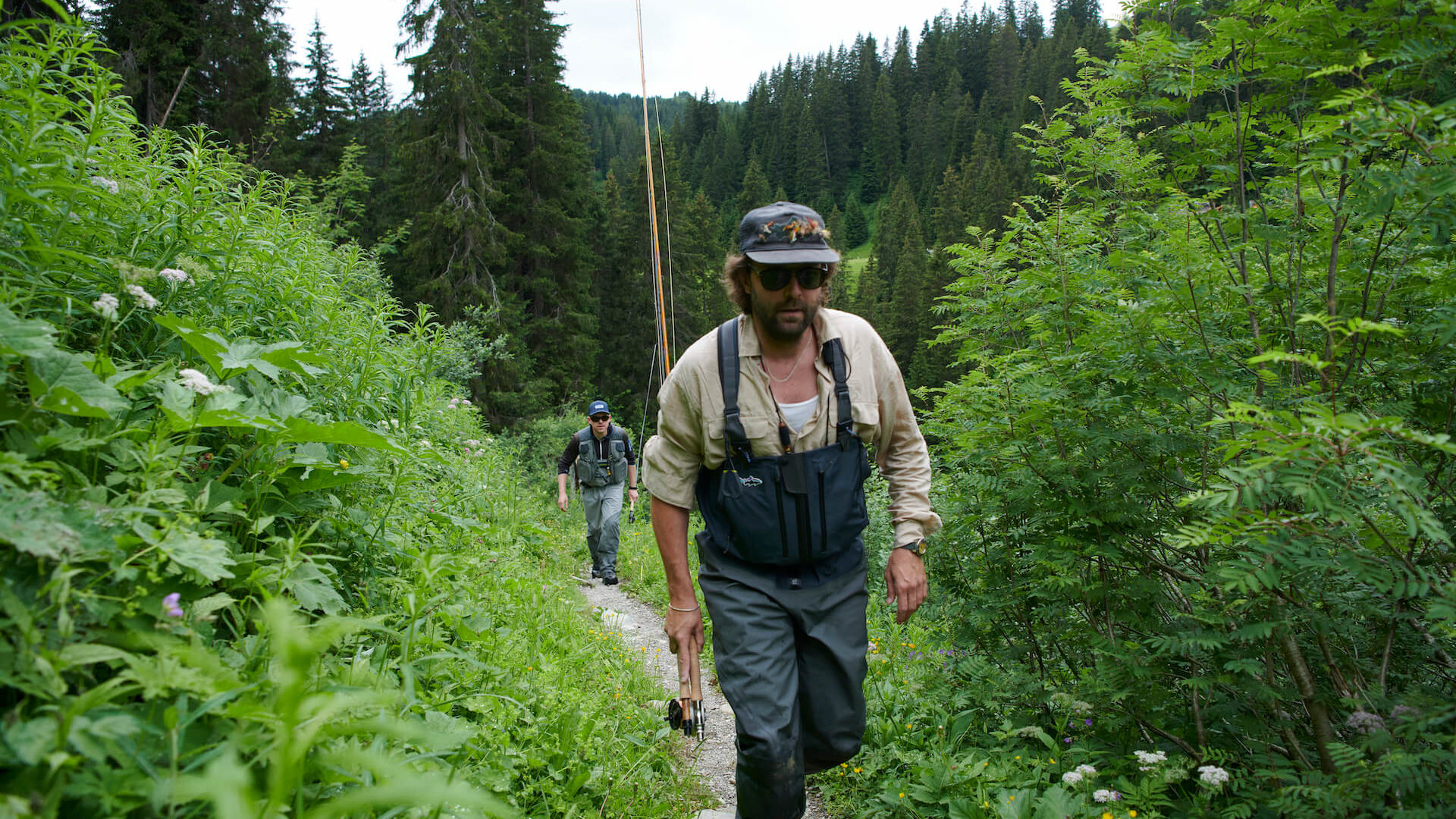 After a long walk we could finally see the river. However, it was flowing about 200ft down from where we were. There was no path down to the water but a small creek provided some sort of guidance. We decided to give it a try knowing the way back up would be hard.

When we finally made it down to what had looked promising from above, we were not disappointed. In front of us lay a beautiful pool where the water was flowing out of an impressive gorge. Christian went ahead and carefully fished the pool. It didn’t take long until he was into the first brown trout. 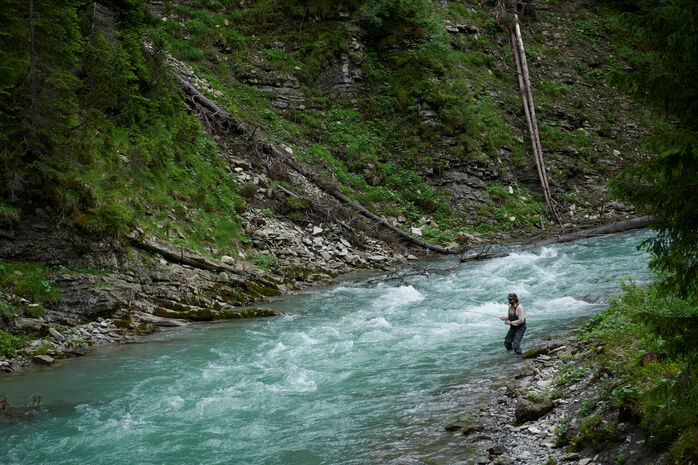 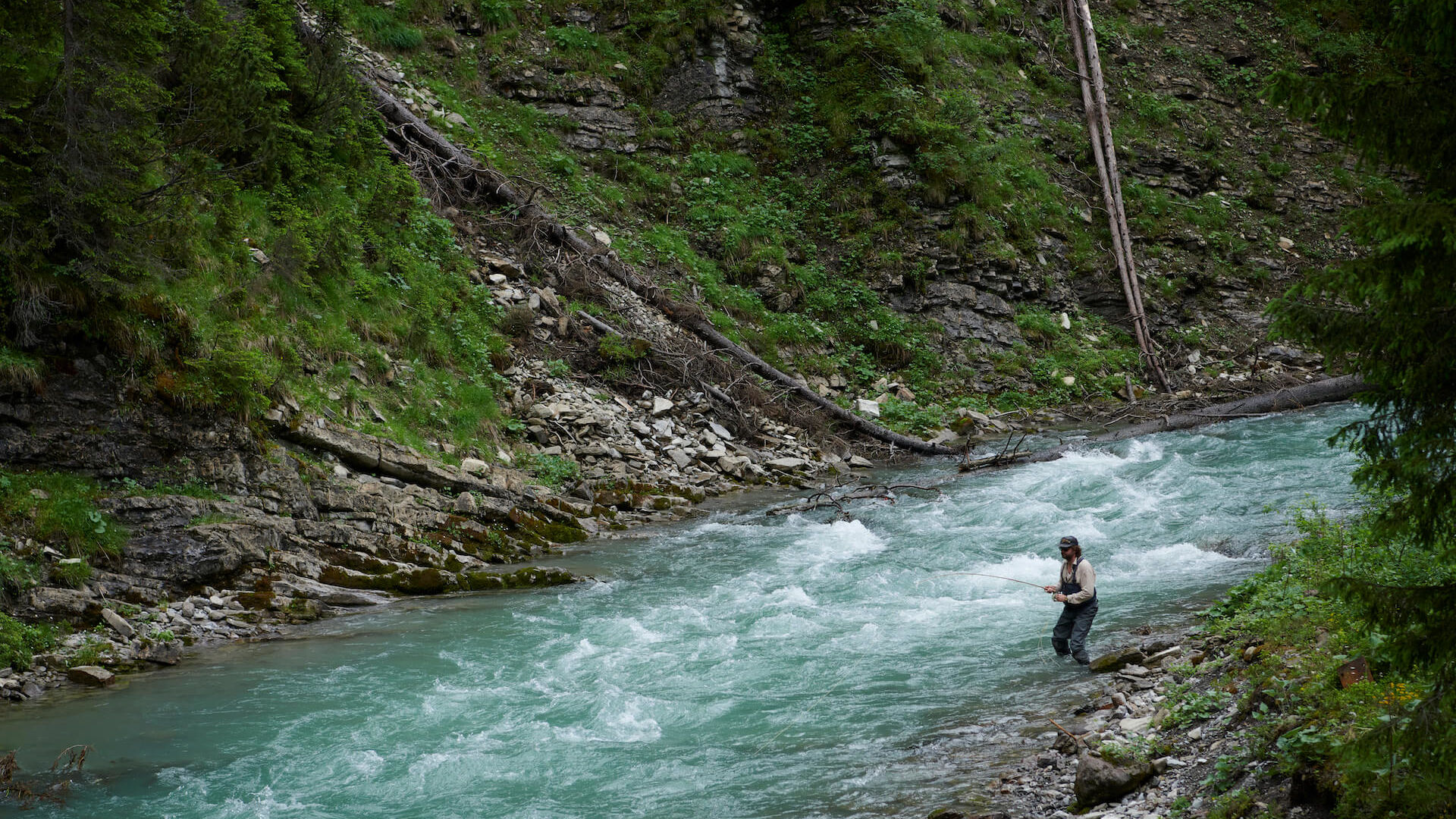 After landing a few fish from the pool, our idea was to head further down and then make our way up to Warth, a small village. From there we intended to take the bus back to where we had parked. Unfortunately we had done the math without the host. The further we worked our way down the river, the narrower the gorge got and the steeper the hills surrounding the Lech. There was no way out. We had to turn around and go back the way we had come. 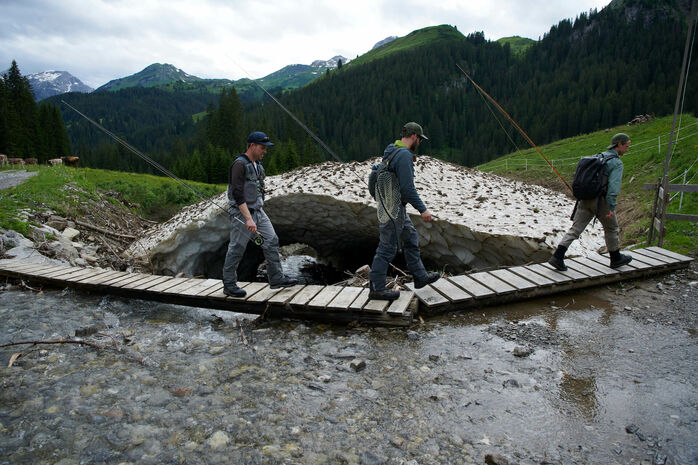 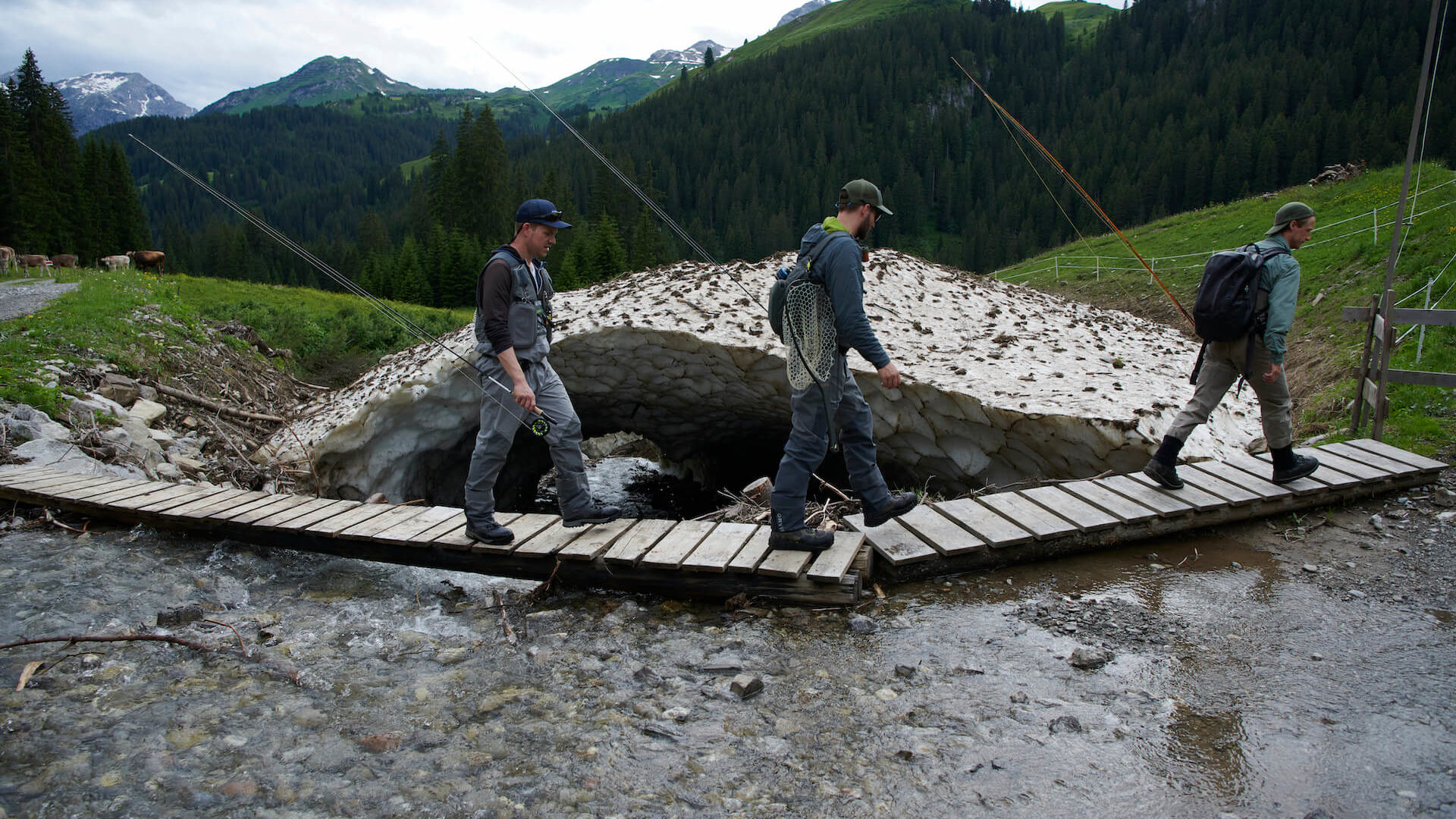 We all agreed that this is what happens when you want to explore new places. You have to risk that your plan is not going to work.

When we finally made it back to the hotel it is fair to say we were a little exhausted. But the prospect of the dinner with the fish Christian had caught in the morning made us forget the strains of the day quickly. 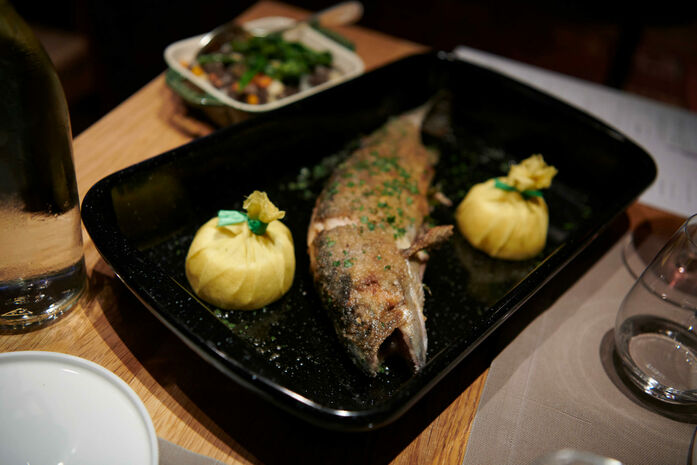 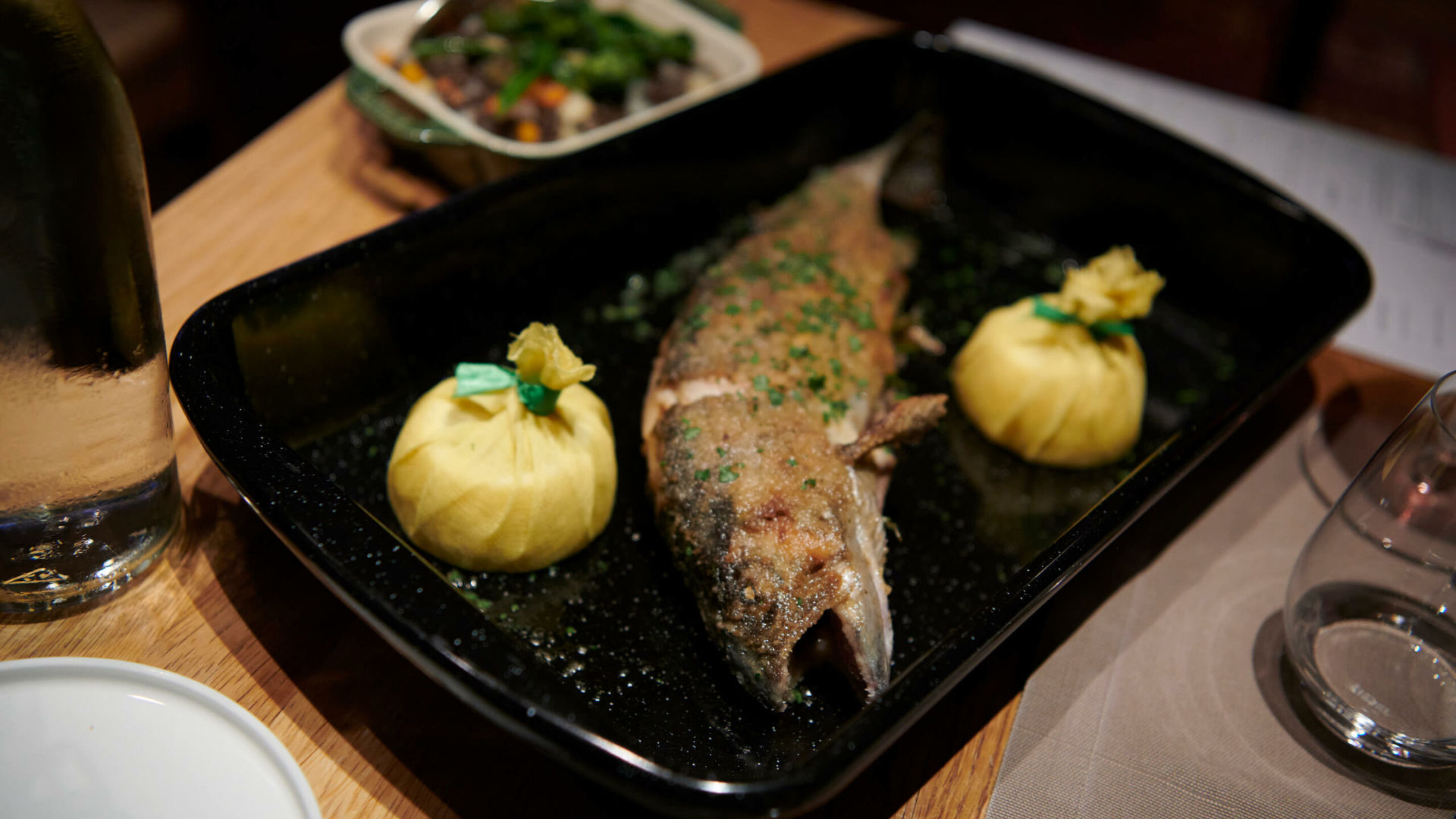