Home on the Arlberg, at home in the world

A long-time participant of the Freeride World Tour with more than 28 appearances on the winner’s podium, Freeride World Champion Lorraine Huber is considered one of the world’s strongest and most experienced big mountain skiers.

Lorraine has been involved in numerous film productions by renowned filmmakers such as Warren Miller. For her achievements in front of the camera, which have taken her to Alaska, Patagonia, Greenland, and more, she was awarded "Best Freeride Female" at the International Freeski Film Festival in Montreal in 2013. Preferably, she most enjoys shooting in her native Arlberg, having appeared in the short film 'Structure: A Ski Track in the Cultural Landscape' by Hanno Mackowitz, who received the 2017 jury prize at the St. Anton Film Festival.

Growing up in Lech am Arlberg, the passionate skier started heading off-piste at an early age. At the age of 23, this daughter of a ski instructor completed her own state-certified ski instructor and ski guide training in 2004. Together with a friend, she founded the Freeride Center Sölden, a new type of ski school specialising in off-piste winter sports.

Every year, she organises the popular "Women’s Progression Days:" a freeride ski touring camp for women with a focus on backcountry skiing techniques and risk management. Lorraine is currently completing her master's degree in mental coaching at the University of Salzburg and is a company speaker who presents on performing under pressure and ‘flow-state.’

More information about Lorraine at www.lorrainehuber.com 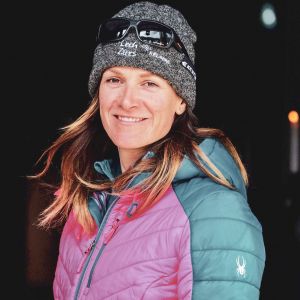 “Lech Zürs is my home. Undoubtedly, the mountains here have had a fundamental influence on me as a skier and as a person. The opportunity to showcase my activities as a professional freerider on behalf of Lech Zürs as a tourism destination is as natural for me as riding the slopes here that I love so much. I am living proof that Lech Zürs is one of the best freeride destinations in the world.”
Skiing
Freeride & Freeski